Here's another mix I made of the music I've been listening to lately.

Things start off nicely with some garage punk wrapped up in a ball of fuzz with Flashlights from Brevard Florida. They are a scrappy punk band that plays their amps at 11 and sound like they never venture out of their garage.

We get underground and skramzy with a band called Sailboats. They only released two songs before breaking up though there is always talk that they recorded an LP that will eventually be put out by Discos Huelgas. Half of this band became Loma Prieta. 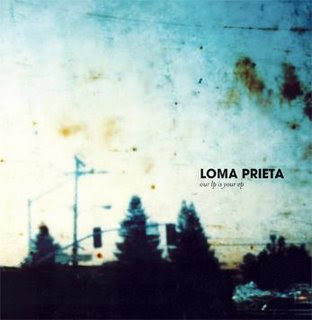 Speaking of Loma Prieta, they're the next artist on this split. This is a whole bunch of their music, tracks from 2006's Our LP Is Your EP, 2008's Last city, 2009's split with L'Antietam and 2009's Dark Mountain. I think Lom are awesome but they are an acquired taste. The vocals are always ear shattering high pitch screams and the guitars are usually raging pissed off punk style. Great stuff you like abrasive screamo.

We end things out with some tracks from the latest lp from Megadeth. Megadeth isn't my favourite thrash band but these songs are pretty good. TH1RT3EN isn't groundbreaking nor does it show any artistic development at all but these songs are good, solid thrash metal. I do wish Mustaine would keep his politics to himself though, metal is apolitical at best and left wing at most.
Posted by SMAWJ at 10:40 PM No comments:

We start with Tera Melos, an experimental post hardcore math rock band from Sacramento. They mash up a whole bunch of genres and rarely have conventional song structures. The Skin Surf is insidiously catchy.
We move to a much more obscure band that plays much weirder music, called Altered States. I’m not really sure how to describe the music other than experimental post rock. Except it’s not really using the rock and roll language, almost more like experimental ambient with more foreground elements than usual. Strange but I like it.

Things get instrumental and kinda heavy with Talons. They play instrumental post rock that is more post metal than a lot of bands. Think Explosions In The Sky but heavier.

We get noisy with an Australian punk band called TV Colours. They play lo fi, abrasive, noisy punk rock with vocals that are just as distorted and angry.

We head over to Britain for some tasteful post rock with light electronic touches around the fringes courtesy of Gallops.

Back across the pond we get a a track from the solo project of the Bobby Darling, guitarist for Gatsbys American Dream, called Places and Numbers. It kinda sounds like a singer songwriter if instead of acoustics singer songwriters used synthesizers to wrap electronica around their songs.

We head down to Olympia Washington for a few tracks courtesy of Broken Water. They play a shoe gazey kind of punk with really catchy vocals and female singer. Kinda pop songs wrapped up in noise that doesn’t ever become too abrasive or overpowering.

We come up to Canada for some hardcore punk from Ancestors from Toronto. They end up somewhere in between skate punk and hardcore with some nice guitar based melodies.

We stay in Canada for one track from an Edmonton hardcore band called Cope. It’s a tad chaotic but I like it still.

We stay in Alberta but head up to Fort McMurray for some post hardcore courtesy of Desiderata. This is only the intro to their album but I think it’s quite good.

Still in Alberta next up is a band called Fuck Tower. They were a two piece post punk band from Calgary. They were together lest than a year and recorded a demo that was never released. I like this quite a bit and wish it wasn’t so lo-fi.

Now we head over to Austria for some crusty metal courtesy of BØREDØM. Their album is called World Bores To Death which I’m assuming is a shot at/reference to World Burns To Death whom they’re not dissimilar to. Good stuff, this is how I like my crusty metal.

We head back to the states for some tracks by an excellent screamo band called The Kodan Armada. Dude wrote a song about how his father raped his sister. Legit emo. Nuff said.

We head over the the UK for some brand new mathy, screamo influenced punk rock courtesy of Run, Walk! The next four songs are from their split with Sirs, a great American screamo band. It’s a dual project between Top Shelf Records in the states and Holy Roar from the UK. It’s a great record and you can pre order it here

Things end this time round with a couple of brand new tracks from my favourite new post hardcore band Cattle Drums. These are demo’s, from their up coming full length I think and beside from being slightly quiet they absolutely slay. Think a less pissed off At The Drive In with just as cryptic lyrics.

This is the podcast for my radio show Who Programmed This?!? as broadcast through Trent Radio between the hours of 10 and 11 am central tuesday the 11th of october. 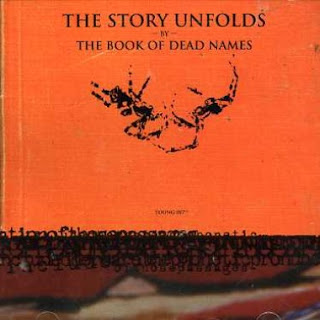 As Saetia screamed, there is no happy here.

This is the podcast of my radio show called Who Programmed This?!? broadcast originally through trent radio between the hours of 10 and 11 on October 4th.

I played almost exclusively bands of a  great Canadian musician named Dave Wenger. I started with M Blanket, a punk pop emo band, proceeded to Ache Hour Credo who are much moodier with a thicker, more obviously emo sound and ended the Dave Wenger tribute with a little bit of Daddy’s Hands, a weirder indie rock band that was very influential in some circles.

I finish the show with a couple cuts from the latest Ampere album which is so awesome.

Here is another compilation of songs I've listened to between september 30th and october 8th 2011 that I think are awesome.

We start where we ended last time with 3 bands by the inestimable Dave Wenger.

The first is M Blanket. This is Dave's second band, very much a punk pop emo band. They were active from 1992-1995

We then move to what was a transition band for Dave Wenger, Ache Hour Credo. They only ever officially released two songs on two separate compilations. They are a lot moodier than M Blanket, with a darker more obviously emo sound.

After Ache Hour Credo dissolved, Dave Wenger moved to Montreal and formed Daddy's Hands. They were a lot less emo, and way more post punk. Bands like Wolf Parade or Frog Eye's claim his as a major influence, indie rock with lots of different bits, like a saxophone,  thrown in for flavour. 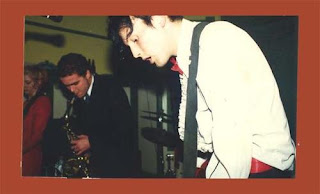 Then we move to a more punkish emo band called In Between.  They play a 90's kind of emocore citing Hot Water Music, Silent Majority, Turning Point and Gorilla Biscuits as their sound touch stones.

We head over to Edmonton for some more screamo courtesy of Gift Eaters. They played straight ahead screamo with some post punk influences. They hand made a bunch of their releases, doing cd-r's and tapes. I played them on my radio show today. 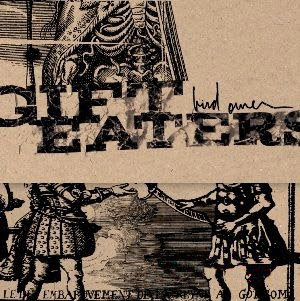 We head down to Los Angeles for a moment for some brand new groove based thrash metal. Five Finger Death Punch are nothing spectacular or new but these songs are decent. Like is too strong a word, I listen to this because I get my metal fix from it.

Now we get underground and screamy again with a split from two really cool bands Adaje & Shark Bait. They both play rather straight ahead screamo. The one is from Louisiana and the other is from Tennessee. Good stuff.

And finally we end with post hardcore focused indie rock courtesy of Sainthood Reps. These guys are getting some flack because apparently its easy to pick out the influences that they wear quite openly. I still like this though, it's nothing groundbreaking but it's quite good for a debut. Makes me think of a less punk version of Make Do And Mend 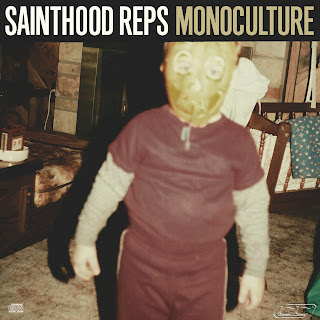 Bubonic Bear are a two piece who play sludgy metal. I really liked their Half Length and looking forward to their new album, This is two tracks from it.
Posted by SMAWJ at 9:16 PM No comments:

Zounds- Curse Of The Zounds

I'd never heard of Zounds until 20 minutes ago when this album came on. It's really good, straight forward ish punk from 1981. 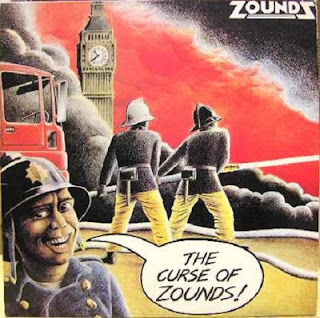 They are an anrcho punk band and were quite good friends with Crass though they sound quite different.

They recorded this, their debut album, in just five days. You wouldn't know it though when you hear how every song is crafted.

This is what I like in my old school punk, lots of energy and sneering and lyrics about the randomest of things that manage to have a social and political awareness about them.

This is punk in the same sense that Television is punk. The basis and construction are clearly punk but these artists are not content with sitting around doing the same thing everyone else is doing so it comes out as something not quite punk.

Or maybe it's just straight ahead punk and I'm thinking too much. In any event, great album.
Posted by SMAWJ at 6:21 PM No comments:

Amalthea - Decisions Should Be A Desert Bright and Clear

A really good emo band. It's swedish and it verges on screamo when they really get going but over all it's an emo piece I think. A more emo and less screamy version of Suis La Lune would not be that far off 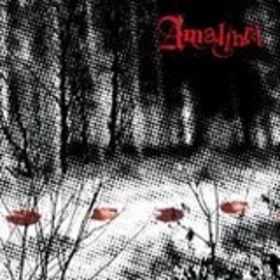 If you listen to this thingy right here you will find out!

It is me blabbering into a microphone and telling you about this incredible, abrasive, emotional music that I love so very much.


Here's a reason to follow me on here instead of tumblr, that list had better punctuation.
Posted by SMAWJ at 5:02 PM No comments:

Adellada are a sweet melodic hardcore punk rock band from Hamilton. They mash a whole bunch of different genres into one super fast, catchy in points and suprisingly melodic punk rock album. They describe themselves as being influenced by "Black Flag, Bad Religion, and Minor Threat to Alexisonfire, Protest The Hero, and Rise Against."

I don't really hear the more hardcore or progressive elements they cite, this is just a fast as balls, melodic at points punk rock album. Lots of backing gang vocals and a metric ton of energy