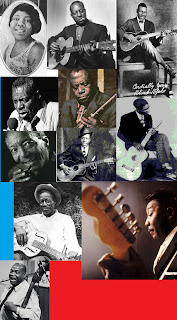 Over the few days I've been listening to nothing but blues. Mostly down  on the plantation delta blues and Howlin' Wolf & Muddy Waters. A little bit of the legend that is  Robert Johnson, a little bit of Willie "Big Eyes" Smith former drummer for Howlin'  Wolf now singer and harp player and a little bit of B.B. King's cousin Bukka White. There's a  little bit of Willie Dixon and a nice dose Big Bill Broonzy. Their folky country blues is quite amazing and impressing still. Speaking of impressive there's Blind Blake and Lonnie Johnson. Blind Blake, of whom there is only one picture plays ragtime guitar. Lonnie Johnson invented sing string solo's and his playing is jaw dropping. He's inventive and clever and his stuff was recorded in the 20's. If Bessie Smith's Graveyard Dream Blues doesn't bring tears to your eyes you have no soul. She's the empress of the blues for a reason. There is only a little bit of Son House but it is incredibly powerful. His a Capella version of John The Revelator is a spiritual revelation unto itself


http://www.mediafire.com/?h3ljjevfnwlkqv4
Posted by Unknown at 4:20 PM No comments: Links to this post