On Thursday, November 16th, Power 97, the local "hard" rock station here in Winnipeg threw their annual concert Powerball. This year it featured Mobile, The Trews, Theory Of A Deadman and Three Days Grace.

Mobile took the stage around 7 to a 1/4 full stadium. There were some people there already, yours truly and Suki being two of them. Neither of us were particularly enamored with Mobile. They're too young to be any good at performing live, and plus the lead singer is just a dick. After their set they were out at the merch table signing autographs, Suki went up to each of them and asked them to sign her pants.

All of them were really nice except for the lead singer and the bassist (alright, the bassist was nice, but he was kinda perverted, more on that in a second). Suki went up to the singer and asked him very nicely if he would sign her pants. He completely ignored her, turned back to the person he was talking to, kept talking for 5 minutes, then turned around and said yes. He's acting like a rock star before he has the rights too.

And the bassist...he was just a little creepy. He grabbed Suki's leg, almost grabbing her ass in the process of signing her pants. Like she said later "He knew what he wanted and just went for it. BAM!"

Up next were The Trews, who in my humble opinion, were the best band there. They looked really scruffy, (half of them have full on beards) and looked as if they were here to rock. And rock they did. Along with The Black Crows, these guys have the potential to carry good-solid-balls to the walls-this one goes up to 11 rock & roll for many years to come

After The Trews were on stage, we went walking for a little while. I got a Trews shirt, and got the brothers to sign my notebook. You have no idea how happy I was!

Unfortunately, after The Trews rocked the stage, Theory Of A Deadman had to come on. I will be blunt, they suck. If Nickleback was the derivitive version of every 80's hair metal band without the good looks and talent + the angst of every 90's alt rock band + a lot of dirt from Alberta, then Theory is the derivative of the derivative. For what they do, dirty, by the numbers, angsty alt rock, it's good. But by it's nature, dirty, angsty, by the numbers alt rock is not good.

The less said about them the better.


And then Three Days Grace took the stage. And the crowd went wild. This is the first show I've been to where there was an honest to god mosh pit. People had backed away and created a circle where people were running around and attacking each other. Quite insane. Three Days Grace was good to be honest. 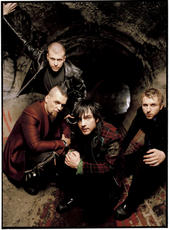 Not quite my style of music, but they definately managed to win me over. My problem is this, I like Metal and Rock and even some Emo. I like a lot of music.

But if you're going to be playing a certain style of music, then you have to do that style of music balls to the wall, turn it up to 11 and all that. And Three Days Grace don't exactly do that anymore. Their first album they were all clean cut and played excellent, albeit by the numbers Metal. It was standard, less dangerous than Godsmack, but still entertaining and at least a little fresh.

Anyway, they put on a very very good show. Both Suki and I lost our voices screaming out the lyrics. She actually screamed more than I did, as she is actually into them, where as I only know a couple of songs from their first album, but her voice was fine yesterday. Where as mine is completely shot to hell and back.


So in summation, Mobile = better on record, The Trews = best Rock 'N' Roll band there, Theory Of A Deadman = Warmed over Crap is still crap (although they do get points for having a lead singer that looks disturbingly like Chris Carraba from Dashboard Confessional, those points are taken away by the fauxhawk the singer rocked, they also get some more points for bringing out the lead guitarist from The Trews who rocked out even more with a mind bending solo, and for playing Santa Monica , the only good song they've come out with in a couple years) and Three Days Grace = Freaking beautifull greasy Emo's that managed to rock my socks off =)

Since I lost my voice at Powerball (I will be posting about that , I promise) and I can still barely talk, here's a dope song that will talk for me right now. From their second album, Discovery, Daft Punk's Digital Love.