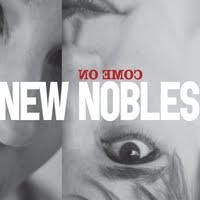 Add together equal parts jump straight up and down pop punk, near virtuoso guitar, a stellar female singer and enough of that country twang to keep things interesting and you get a three piece called New Nobles. I could shorten this review and simply say, I like, it's good, you should buy it. But that wouldn't be doing this album justice.

There's just enough of a countryesque twang to move the music solidly out of mainstream rock but thankfully not enough to turn it into full blown country rock. The guitar is elusive and capturing. Every time you turn around Dean is rocking out a different style. The guitar generally stays within the confines of rock and roll but the tone always changes. From the bluesy solo on “Don't” to the grunge of “L.O.V.” to the pop punk verses of “Right In Front Of My Eyes”, that guitar is always key. Though in a three piece every instrument is critical.

For three piece they make a big noise. These are full songs played with an energy, abandon and sincerity that is missing from rock these days. The songs are remarkably consistent in this age of singles. This album is great back to front with only a minor hiccup around the middle, two mediocre songs surrounding one of the best on the album.

The middle three songs are a conundrum. “Peter Peter” has the energy to turn into something but never does. It seems to be a waste of a great melody and lyrics on a song that doesn't have the necessary energy behind it. The next song “Right In Front Of My Eyes” is one of the best on the album, really catchy vocals over a great bass line and a guitar that is always changing from chords to picking to solo and back. The chorus will be stuck in your head for days, so be warned. Sadly the next song is nowhere near as good and completely different. Most of the songs are high energy rock and roll with tiny bits of pop punk and country

But the aforementioned “L.O.V.” is a mid tempo grunge song completely out of character that never goes anywhere. It just plods along, wasting Jen's great voice simply repeating “l.o.v.” as the guitar slowly crawls along. The last third of the song gets interesting with some psychedelic soloing but most people will be long gone.

Thankfully things kick right back up with “I'll Just Be There” which charges forward with the energy of a promise. The album continues rocking out strong till the last song “Come On” which may be the best song on the album. It's really simple, one riff for the verse and another for the chorus but it comes together in an incredibly catchy package behind Jen's voice.

So if your looking for something that uses all the normal rock and roll touchstones but manages to turn them into something unique and absurdly catchy and is Canadian, you could do a lot worse than this.

official page
facebook
cdbaby
if your in peterborough it`s on sale at Moondance I think
Posted by Unknown at 2:45 PM No comments: Links to this post