Children Of Bodom. If you know the name you're probably a little wary by now and perhaps rightfully so. I've never really listened to them before but their new album Relentless, Reckless Forever is really quite good in a lot parts. 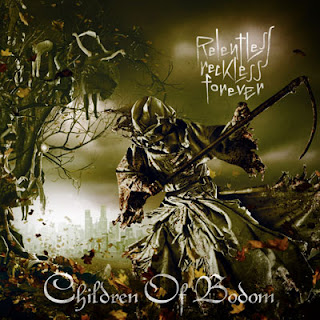 The opening song Not My Funeral is one of the best. There are riffs galore and the interplay between the guitar and the keyboard remind you why one of the major reasons to listen to Children Of Bodom.

The album is definitely front loaded. The first two songs are clearly the best. They are the most riff focused and  don't rely on cliche's to get by.

They play Melodic Death Metal in one of the ways I really like it. There is just the right amount of Power Metal injected into the mix. The music is epic and the playing undeniably great and thankfully the technicality of the music prevails over epic progginess

Which sadly most of this album does. It is incredibly well played and only a fool would say that the guitar and the keyboard are anything other than top notch. But the songs don't seem to work. The riffs either aren't there or they're not interesting.

Even if some of the songs do disappoint in terms of standing up to previous work this album is not bad. The voice that Children Of Bodom have created serve them well in creating material that, if a tad generic, is rather good. Melodic Death Metal with touches of power metal and grandiose technicality. Other than some more hooks, what could one ask for?

It does shine in points and is a solid Technical Melodic Death Metal album but is far from their high points.
Posted by Unknown at 7:31 PM No comments: Links to this post