They have released two EP's prior, both of which are included in this LP. ††† play an brand of synthesizer rock that feels built for a stadium garnering comparisons to bands like Nine Inch Nails and through iconography only is very reminiscent of witch house. I find this  LP frustrating because it immediately contrasts hard hitting, wall of noise Rob Zombie style electro rock but then follows it up with layers of synthesizers that never go anywhere. In their softer moments †††  reminds me of bands like Air or The Neverending White Lights.


This outfit clearly has the ability to make turn-it-up-to-11 style anthemic arena rock but they get mired in layering slow synth over slow synth and the droomy atmosphere drains all energy from the proceedings.This album being an LP seems off to me because of the only five new songs, old fans will know most of these songs already and it becomes unwieldy and uneven when stitched together into this "new" LP. 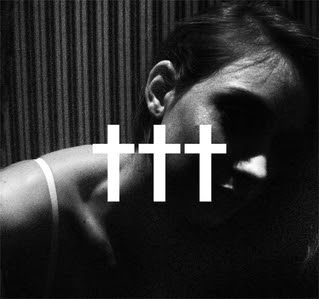 My favourite songs are spread pretty evenly across all three releases, †his Is A †rick, Bitches Brew, †hholyghs†, The Epilogue, Fron†iers, Op†tion, Blk Stallion and Prurien†. If you like your rock electronic and not averse to wandering through layers of synths, †††'s ††† will serve well.

Posted by Unknown at 1:51 PM No comments: Links to this post