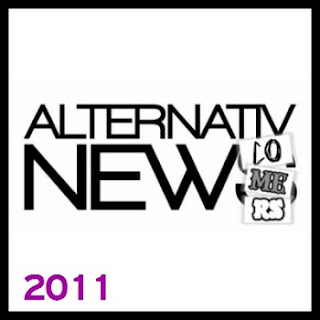 Do you like screamo, hardcore and punk pop? Do you like jumping between those genres quickly without warning? Even if you don't you should check out this free compilation. If you like pop punk and melodic hardcore stick with the first half but if you prefer angry, somewhat chaotic music you'll probably gravitate towards the second half.

Things start off well with Caravels and Make Do And Mend. Neither songs are new or unique but they are a good intro to the compilation. Unfortunately things takes an immediate dive right there. Aside from a hardcore song or two and some quite intense screamo this comp is front loaded with pop punk. Bands like Hostage Calm and maybe Daytrader and perhaps even Dear Landlord are able to distinguish themselves but a lot of the bands playing either pop punk or melodic hardcore seem to blur together namelessly. The lack of distinction between those two genres on this album is a large part of why this portion blurs together.

The Pianos Become The Teeth song is a nice change and signals that there is more screamo to come. Things get quite  awesome for awhile. Tigers Jaw keep it at medium speed but manage to brighten things up quite a bit. Castavet do their shiny, shouty thing and Plebeian Grandstand absolutely destroy.

Ordo Ab Chao by Plebeian Granstand really should not be allowed to exist. The song is frantic and sludgy at the same time. It's mathy like Meshugga but a lot more limber and constantly turning on randomly thrown dimes. The vocalist sounds completely tortured and the music is not far from insanity itself. Quite intense. The Republic Of Wolves Greek Fire is also a really intense song but following such chaos it seems rather diminished.

The second half is much better than the first for someone who doesn't care so much for pop punk or melodic hardcore. There is much more hardcore (DANGERS), a nice dose of french screamo (Who Needs Maps) a bit of post rock and screamo (As We Draw) and even some dark screamo (Exhaustion). If you like angry music played faster than it should be, filled with bile and hatred usually played by bands that get described as unreasonably pissed off then the second half will bring many rewards.

There is only a little bit of pop punk on this end of the album and both RIVR and Stay Ahead Of The Weather are great, innovative punk pop bands.

If you're like me the first half of this album will leave you thinking "Ok, you can write a pop punk song. Good for you. Maybe do something unique and true to you?" But that is nicely balanced out by the inclusion of a bunch of screamo and other more original bands that play with different song structures and the like.
Posted by Unknown at 9:37 AM No comments: Links to this post