The Dropkick Murphy's started playing a rather rough version of Boston Celtic punk in 1996. In the prevailing years the band has grown in terms of sound, ability, members and popularity. They have added more and more elements of Irish punk into the mix moving away from the raw street punk they started with. 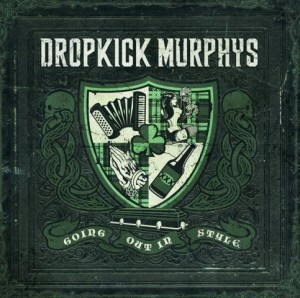 Their latest album Going Out In Style is officially released today and it does not disappoint. They have changed their sound slightly again, this time round they're more folky and a tad less aggressive but no less energetic. Songs like Sunday Hardcore Matinee and the raucous title track kick your ass continously while never forgetting about the melody and using some interesting instrumentation. Springsteen even shows up to sing a verse.

If you don't know the Dropkick's then this isn't a bad introduction. You might be surprised at how punk they can get but these are solid songs that work with the folk influence. If you do know Dropkick then this won't surprise you at all.

These songs work just as well blasting out of your speakers turned up to 11 as they do coming through your headphones in the middle of the night. It's not often a combination of punk and folk works in both settings.

The first two songs are both really very punk and may trick you slightly but variations come fast and strong after that. It's a wild ride well worth sitting through.
Posted by SMAWJ at 6:42 PM No comments: