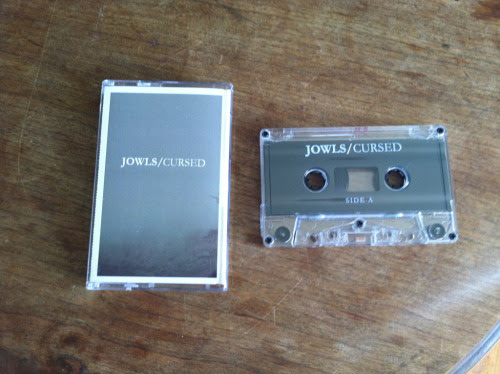 Jowls are a three piece post-hardcore/screamo band from  Grand Rapids, MI. The band is made up of Ryan Martin on guitar and vocals, Jeff Kraus on drums and vocals and John Harmon on bass. The band is made up of former members of both Victor Fix the Sun! and Cloudmouth. Started as a two piece and added the bassist from Cloudmouth for their new LP. It's called Cursed and will be released May 22 2012 by Doghouse Records. You can stream the entire album on Absolute Punk right here. One of my favourite bands currently, their debut up came out of nowhere and punched me in the face repeatedly and while their split with The Reptilian went in a little straighter post-hardcore direction it's still really great.

Posted by Unknown at 10:10 AM No comments: Links to this post

Tell-Tale Hearts are a screamo band from Toronto, Ontario, Canada. They play a fairly straight ahead version of screamo that can get chaotic at times and has some tapping and twinkles thrown in for flavouring. Dude's got an awesome scream that sounds like it's being ripped from his guts. The production is not great as it is their demo but it's really cool to hear more bands like this from Toronto. Features members of Marla Singer, Ramon Gris and Delo Truda


Posted by Unknown at 2:46 PM No comments: Links to this post

Interskramz is a DIY record label based out of Oregon/Boston. Both original tunes and a distro in conjunction with  INSRGNT.

You can check out all the artists they're associated with here on their bandcamp http://interskramzrecords.bandcamp.com/

The label doing the distro can be found here https://www.facebook.com/pages/INSRGNT-Arts/115929735160540?sk=info; http://insrgnt-arts.tumblr.com/; and here http://insrgntny.bigcartel.com/
Posted by Unknown at 10:05 AM No comments: Links to this post

Think Big! are a punk pop band from Pocono Summit Pennsylvania. I usually have a problem with pop punk but this band is really good. I quite enjoy the gruff vocals. Reminds me of Stay Ahead of The Weather but with gruffer vocals and a faster sound that leans towards hardcore end of the spectrum than it does the poppier end of the spectrum. The first song is the best and it goes downhill a little bit from there but it's still a solid ep. Free download courtesy of Death To False Hope Records http://deathtofalsehoperecords.com/downloads/dtfh123.html


Posted by Unknown at 8:12 AM No comments: Links to this post

a really great ambient song that also works as non ambient music. I'm studying for my exam tomorrow and listening to the three albums Brian Eno made with Hans-Joachim Roedelius and Dieter Moebius of Harmonia. Really really good stuff
Posted by Unknown at 1:45 PM No comments: Links to this post

Mount Carmel are a three piece band stoner blues band from Columbus, Ohio. The base of the music is obviously blues but the guitar tone and the playing style add in some really nice elements of stoner metal. Thicker and heavier, almost sludgy at times but still keeping that blues bass to it so it hits two things I really like, stoner metal and blues. Huge sound for a three piece.

Posted by Unknown at 5:41 AM No comments: Links to this post

Great song, epic length for them as its pretty much double the length of their longest song. Kinda surprised at how terrible their stage presence is, would have expected them to be more active
Posted by Unknown at 7:47 PM No comments: Links to this post

Indian Taker are a 5 piece screamo band from Modesto California. Formed in October 2011 this past February saw the release of their debut EP Tule Fog. They're all still in high school. The music goes back and forth between punked up emo and more obviously screamo instrumentally while the main vocalist has a nicely ragged voice.


People seem to be comparing them to Touché Amoré but I don't hear it, nowhere near as hardcore, more of a focus on the melodic punkier aspects of screamo.


This is screamo but it's pretty punky while still having lots of melody. They are planning an acoustic split with The Winter Passing online and on tape through Guys With Beards Records.

Posted by Unknown at 7:45 PM No comments: Links to this post