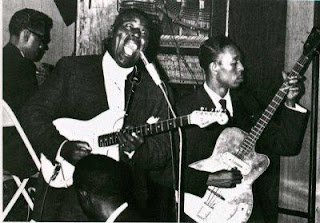 If there is one king of the Chicago blues I think the crown could easily be given to Howlin' Wolf. Cub Koda wrote that Cub Koda declared, "no one could match Howlin' Wolf for the singular ability to rock the house down to the foundation while simultaneously scaring its patrons out of its wits." For all of Muddy Waters talents he lacks an growl, a roar to his music that makes everything jump. Wolf's voice has grit to it, enough to drag you out of your chair and onto the floor while he's bellowing at you. Here's just a taste

Moanin' In The Moonlight - 1962  - his first two albums which have most of the songs he's known for, not quite so electric pure chicago blues
More Real Folk Blues - 1965 - more of that pure Chicago blues, lots of guitar, some piano and tons of harp

Howlin' Wolf - This is the New Howlin' Wolf Album - 1968  - psychedelic blues that foreshadows what would come with the london sessions a few years later. Has some weaker spots where the psychedelia outshines the blues but Spoonful comes alive with some ultra blistering guitar and Moanin At Midnight is awesome as a  stripped down minimalist electric song
London Sessions - 1971 - Recorded with Eric Clapton, Steve Winwood, Bill Wyman & Charlie Watts. Nuff said
Posted by Unknown at 4:50 PM No comments: Links to this post